President Donald J. Trump has just announced via Twitter that he has fired Secretary of Defense Mark Esper. President Trump says that Christopher C. Miller, the Director of the National Counterterrorism Center, will immediately assume office as the Acting Secretary. Miller had previously been unanimously confirmed to his post by the United States Senate.

This move is long overdue, and a sign that President Trump is still more committed than ever before to his signature mission of draining the swamp; he had previously hinted at firing Dr. Anthony Fauci after his re-election as well, and other similar firings may be coming soon. 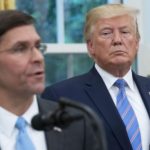