President Trump has just demonstrated that he has no intention of letting the culprits behind impeachment get away with their attempted overthrow of his Administration.

It has been reported that Lt. Col. Alexander “Sasha” Vindman and his twin brother, Yevgeny, have been fired from their roles in the National Security Council, and both were escorted out of the White House by security. Then, to add even more good news, Ambassador to the European Union Gordon Sondland was recalled from his post back to the United States.

Vindmand and Sondland were long touted by the Democrats as “star witnesses” in the bogus impeachment trial, along with Ambassador to Ukraine Marie Yovanovitch, who President Trump has already previously fired.

By testifying against President Trump and alleging that he committed high crimes with no evidence whatsoever to backup their claims, they put their own personal agendas and petty dislike of the President ahead of the well-being of their country. As such, they are getting exactly what they deserve, and justice is being done at last. 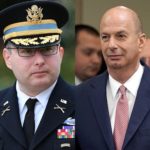