In the latest blow to the Deep State, and the latest victory for true justice, another political prisoner has just been spared from an unlawful prison sentence.

Roger Stone, the longtime political consultant and personal friend of President Trump, had been sentenced to over three years in prison for allegedly lying to Congress as part of the “Russian collusion” investigation by Robert Mueller. However, it has just been announced that President Trump has granted clemency to Stone, immediately eliminating his sentence just before he was set to report to prison on Tuesday.

Along with the vindication of General Michael Flynn, this represents the biggest step yet in the fight to push back against the Deep State, the Russian hoax, and the Swamp that has continued to persecute many allies of President Trump, simply for the crime of supporting him. Justice has been served once again. 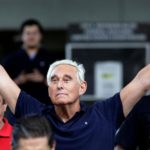