President Trump has outdone himself yet again. Just like with North Korea, the President has managed to do what no president before him has done, and negotiated peace in one of the world’s most volatile regions. After announcing an initial ceasefire in Syria several weeks ago, today President Trump announced a “permanent ceasefire” on the Syria-Turkey border. In exchange for this ceasefire’s implementation, President Trump announced he is lifting all of the recently-imposed sanctions on Turkey.

Despite the endless criticism from the pro-war political elite, President Trump has turned years of an unchallenged foreign policy consensus on its head and proved that a bold new approach can, and will, work to achieve peace. He is not only putting America First by bringing our troops home, but he has proven that this approach can lead to a greater peace than any state of perpetual war could ever achieve.

President Trump provided an update on the situation in Syria from the White House on Wednesday. Turkish forces invaded northern Syria after Trump’s decision to withdraw U.S. troops from the region a few weeks ago and several ISIS supporters were reported to have escaped from a Syrian camp. Vice President Mike Pence and Secretary of State Mike Pompeo managed to meet with Turkish President Recep Tayyip Erdogan last week and agreed to a temporary ceasefire.

On Wednesday, Trump said the two sides have agreed to a lasting ceasefire. As a result, he’ll lift the economic sanctions on Turkey that he enacted a couple of weeks ago.

Turkey told the U.S. that it will be stopping combat in the region, Trump said at the White House. The ceasefire, he added, will be “permanent.” A small number of U.S. troops will remain in the area to protect the oil.

The U.S.’s actions, Trump added, will provide a peaceful area between Turkey and Syria, including a 20-mile wide safe zone. As for ISIS fighters who escaped, Trump said they have been largely recaptured.

“Let someone else fight over this blood stained sand,” the president added.

Russia and Turkey reached their own agreement on Tuesday, calling for the withdrawal of Syrian Kurdish forces from the Turkish border and joint military patrols of the area.

Before his White House remarks, Trump wrote on Twitter that the agreements had been successful.

Big success on the Turkey/Syria Border. Safe Zone created! Ceasefire has held and combat missions have ended. Kurds are safe and have worked very nicely with us. Captured ISIS prisoners secured. I will be making a statement at 11:00 A.M. from the White House. Thank you!

Both Democrats and Republicans blasted Trump’s decision to take troops out of Syria, because it was viewed as abandoning our Kurdish allies.

“We have left them to the wolves,” Rep. Adam Kinzinger (R-IL) said on “Face the Nation.” “The message this is sending to our allies around the world I think is really going to be bad.” 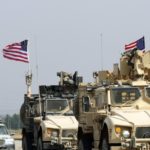