The unprecedented and highly unconstitutional second Senate impeachment trial of President Donald J. Trump has ended in the exact same way that the first one did: With a vote to acquit him of all charges.

Brought up by the Democrats in a blatantly partisan move in President Trump’s final days in office, the single article of impeachment baselessly accused the President of “inciting an insurrection” after protesters stormed the U.S. Capitol on January 6th, out of protest of widespread voter fraud in the 2020 election. The article was rushed through the House of Representatives with no time to conduct a full investigation, with all Democrats and ten Republicans voting in favor.

Now, in the United States Senate, 57 senators voted to declare the former President “guilty,” while the remaining 43 voted “not guilty.” In a Senate impeachment trial, two-thirds of the Senate (67 senators) is required to successfully convict a president. As the final vote fell 10 votes short, President Trump is not going to be barred from possibly running for office again if he chooses to seek a second, non-consecutive term as President in 2024.

With the Senate evenly-divided at 50-50, 7 Republicans sided with the Democrats to vote in favor of conviction. Those seven are: Richard Burr of North Carolina, Bill Cassidy of Louisiana, Susan Collins of Maine, Lisa Murkowski of Alaska, Mitt Romney of Utah, Ben Sasse of Nebraska, and Pat Toomey of Pennsylvania. Cassidy, Collins, and Sasse were all re-elected just last year, while Murkowski is up for re-election next year. Romney will not be up for re-election until 2024, and Burr and Toomey have both announced their intentions to retire next year, leaving both of their seats open. 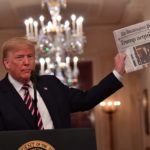