Nancy Pelosi, the extreme leftist House Speaker from San Francisco, has been re-elected as leader of the Democratic caucus in the House of Representatives, meaning that she will stand as the Democrats’ nominee for the next election for Speaker of the House in January 2021.

This comes even as Pelosi presided over a devastating loss of seats in the lower chamber for the Democratic Party. Despite most mainstream media outlets and pollsters predicting that the Democrats would expand their 232-seat majority by up to 15 seats, the Republicans had a stronger-than-expected turnout and have currently gained 9 seats, bringing the Democrats’ majority down to only about 223. In the House of Representatives, 218 seats are needed for a majority.

With several more tossup races still uncalled and many leaning in the Republicans’ favor, Pelosi could be facing the most razor-thin House majority since the 1940s. This is in addition to the Republicans being strongly positioned to hold the United States Senate, and President Donald J. Trump winning re-election, although the media and Democrats have falsely claimed that Joe Biden has won due to mass election fraud.

Not only was the 2020 House election result a clear repudiation of the Democrats’ increasing shifts towards socialism and other far-left ideas, but the GOP under President Trump greatly expanded its electoral coalition. President Trump earned the highest share of non-White voters for a Republican presidential candidate since Richard Nixon in 1960, and the Republicans also saw 35 women elected to the House this year under the GOP banner, a historic number both for the Republican Party and the House in general. In 2018, only 13 Republican women were elected to the House.

This means that, whatever happens with the presidential election and regardless of who is sworn in on January 20th, the Republican Party will enter the next Congress with stronger numbers, a more diverse coalition, and more voter enthusiasm thanks to the America First agenda of President Trump. This ensures that Pelosi’s next two years as Speaker, which could be her final term, will not be easy. 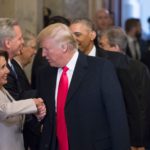