The Democratic Party, determined to continue attacking President Donald Trump even as his first term draws to a close, have introduced a single article of impeachment against President Trump.

The article in question falsely accuses the President of “willfully inciting violence against the government of the United States,” and also claims that he “willfully made statements that encouraged — and foreseeably resulted in — imminent lawless action at the Capitol.”

House Speaker Nancy Pelosi had previously demanded that Vice President Mike Pence invoke the 25th Amendment to have President Trump removed from office. However, as the Vice President has refused to do so, Democrats have since announced their intentions to vote on the article of impeachment sometime this week. 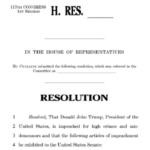 BREAKING NEWS: One Article of Impeachment introduced against President Trump