In a stunning revelation in the case of the death of George Floyd, the official autopsy‘s preliminary findings have confirmed that Floyd’s death was not the result of “traumatic asphyxia or strangulation.”

The autopsy further revealed that Floyd “had underlying health conditions, including coronary artery disease and hypertensive heart disease.” This, combined with the manner in which Floyd was physically restrained by the police, most likely contributed to his death.

This revelation comes after the officer who knelt on Floyd’s neck, Derek Chauvin, was fired and subsequently taken into custody for Floyd’s death. Following his death, there have been mass riots throughout Minneapolis for several consecutive nights this week, in which hundreds of businesses have been looted and burned, and at least one looter was killed by a pawn shop owner in an act of self-defense. 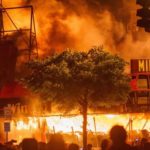 BREAKING NEWS: No ‘asphyxiation or strangulation’ in George Floyd’s death