It turns out that there was an added layer all along to Mitt Romney’s political ineptitude. Although Romney can barely defend himself as it is, he apparently saw it fit to do so from behind an alternate account on Twitter: “Pierre Delecto.”

The biggest issue isn’t even that a former governor and presidential candidate-turned-Senator had an alternate account; the true problem is that he could only defend himself against criticism from behind this false name rather than do so himself. This can only be either cowardice or sheer incompetence.

It is more apparent now than ever before that we should be truly grateful for a man like President Trump, who actually has the spine to defend himself directly, rather than cower from journalists or hide behind an alternate. And may we never return to the age of Republican nominees like “Mittens” Romney.

The former GOP presidential nominee’s full disclosure came after his published interview with The Atlantic’s McKay Coppins, in which he acknowledged the existence of a secret account he uses “to keep tabs on the political conversation,” according to McKay.

The revelation came during a conversation about President Donald Trump’s Twitter insults:

“That’s kind of what he does,” Romney said with a shrug, and then got up to retrieve an iPad from his desk. He explained that he uses a secret Twitter account—”What do they call me, a lurker?”—to keep tabs on the political conversation. “I won’t give you the name of it,” he said, but “I’m following 668 people.”

Romney went on to show Coppins several accounts he follows, including athletes, journalists, and comedians.

McKay’s piece led Slate’s Ashley Feinberg to dig in and eventually come up with an account that fit the bill on several levels.

Feinberg’s article listed several reasons she felt like the account was Romney, including that it’s first follow was Romney’s oldest son, Tagg, “joined shortly thereafter by Glen Johnson, a current politics editor for Boston.com who was firmly on the Romney beat around the time the account was originally created.” Other social media “follows” included a former Romney campaign adviser along with all of Romney’s children and people “you might expect someone like Mitt Romney to follow, including Larry Kudlow, Bill Kristol, and John McCain.

The Slate piece sparked Coppins to ask Romney whether the Slate article was correct. The Utah senator’s response? “C’est moi,” French for “It’s me.”

Coppins then added the following update to his piece:

“(After this story was published, Slate identified a Twitter account using the name Pierre Delecto that seemed to match the senator’s description of his lurker account. When I spoke to Romney on the phone Sunday night, his only response was, “C’est moi.”

The account went to “protected” status shortly after the Slate article was published. 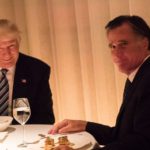