Just when you thought the 2020 Democratic Struggle Bus couldn’t get any larger, yet another candidate has announced an unceremoniously late entrance into the race.

Former New York City Mayor Michael Bloomberg, the anti-gun mega-billionaire, has filed to run for president as a Democrat in Alabama’s 2020 presidential primary. Although he is still yet to “officially” announce a bid, this all but confirms that he will eventually launch a full-fledged campaign.

This further proves that the Democrat Party is still as uncertain as ever about its chances against President Trump in the general election. It proves that they are no longer confident in Joe Biden’s status as the supposed frontrunner, and they are also equally terrified of the far-left socialist Elizabeth Warren surging past him. Yet it further highlights their hypocrisy, that now they – the party that is against capitalism and constantly espouses anti-wealth rhetoric – is now turning to a man who is worth a staggering $53 billion, one of the wealthiest men in the entire world.

Just as with any other sudden new entry, there is only one winner out of this development: Donald Trump. 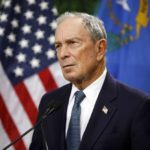