After nine months, Stephanie Grisham will be stepping down from her position as White House Press Secretary to return to her previous post as First Lady Melania Trump’s Chief of Staff. Replacing her will be none other than campaign spokeswoman and frequent guest on AMERICA First, Kayleigh McEnany.

Kayleigh is as articulate a supporter of President Trump’s agenda as can be, unafraid to talk about the truths that the media doesn’t want you to hear, and to defend his record against the lies and slander that the Left promotes on a daily basis. You would be hard-pressed to find a better choice for this crucial role than Kayleigh. 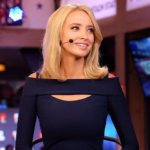