Joe Biden has finally announced his selection of a running mate for the 2020 general election: California Senator Kamala Harris.

Harris, who was first elected to the Senate in 2016 after serving as California’s Attorney General, ran for President herself in the 2020 primaries. She famously attacked Joe Biden in the very first primary debate, accusing him of being a racist due to his opposition to forced desegregation busing for public school students. Although she briefly rose in the polls following that incident, her numbers dropped dramatically when the tables were turned on her in the second debate, and her record as California’s Attorney General was criticized by Hawaii Congresswoman Tulsi Gabbard. She dropped out of the race before the first contests even began.

With this selection, the Democratic ticket has officially solidified itself as being wedded to the far-left. Harris, a dangerous radical in her own right, was selected almost entirely due to her gender and race, thus confirming that for the modern Democratic Party, identity politics matters more than actual substance, character, and integrity. 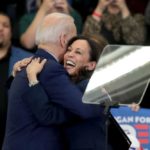