President Trump had already appointed Neil Gorsuch and Brett Kavanaugh to the court earlier in his term. Justice Barrett has taken the seat that was vacated by the passing of Ruth Bader Ginsburg, a liberal justice who was appointed by President Clinton in 1993. Democrats attempted to argue against Barrett’s confirmation, claiming that the confirmation was taking place too close to the upcoming presidential election. But Republicans, under the leadership of President Trump and Senate Majority Leader Mitch McConnell, stood their ground and fulfilled their constitutional duty by confirming Justice Barrett anyway. Every Republican voted in favor of Justice Barrett, with the sole exception of Maine Senator Susan Collins. All Democrats voted against her. 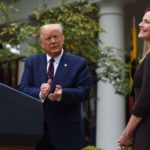