In a major step towards stopping the steal and saving the 2020 election from mass voter fraud, Missouri Senator Josh Hawley has become the first United States Senator to commit to formally challenging the fraudulent electoral results on January 6th.

Senator Hawley made the announcement from his official Twitter account, declaring that “Millions of voters concerned about election integrity deserve to be heard,” and that he “will object on January 6th on their behalf.”

In order for the formal challenge to be taken to a vote in Congress, the results must by challenged first by at least one member of the House, and followed by a challenge from one member of the Senate. Previously, Senator-elect Tommy Tuberville of Alabama had hinted at the possibility that he would be the first Senator to formally challenge the results, though he had not yet made an official commitment by the time Hawley made his announcement. 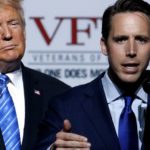