Former Congressman John Ratcliffe, of the great state of Texas, has just been confirmed by the U.S. Senate as the next Director of National Intelligence. Director Ratcliffe was confirmed by a vote of 49-44, and will take over from Acting DNI, and former Ambassador to Germany, Ric Grenell.

Ratcliffe’s confirmation comes almost three months after President Trump first announced him as his nominee for DNI in late February. As a Congressman, Ratcliffe was a member of President Trump’s congressional defense team during the Senate impeachment trial, which highlighted his legal expertise and devotion to the Constitution.

Ratcliffe now takes over a key intelligence position as more revelations are emerging, on an almost daily basis, about the Obama Administration’s plot against the Trump campaign and Trump Administration, including the targeting of Lieutenant General and former National Security Adviser Michael Flynn. 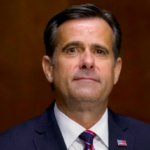