As the impeachment circus continues on, the true search for justice continues silently behind-the-scenes.

Several weeks ago, the media completely ignored the significant development of John Durham’s probe into the origins of the “Russia” hoax officially becoming a criminal investigation. The implications of that move were massive, signaling that Durham and Attorney General Barr had found sufficient evidence of not only wrongdoing, but of serious crimes.

Now, the scope of the investigation has become even clearer. As our good friend and brave investigative journalist Sara Carter reports, Durham’s investigation is now focusing on the Pentagon office that was in direct contact with the British spy Stefan Halper. As Halper’s involvement was crucial in entrapping Trump campaign aides Carter Page and George Papadopoulos, by falsely offering and then interrogating them on possible Russian “dirt” on Hillary Clinton, Durham’s team is now interrogating personnel from the Pentagon’s Office of Net Assessment, trying to determine who was communicating with Halper as he organized this entrapment scheme.

There is no better comparison for this scenario than the classic tale of the tortoise and the hare: As the arrogant hare of impeachment rushes ahead and burns himself out before even reaching the finish line, the tortoise of Durham’s investigation trudges along, slowly but surely, never losing sight of the goal. 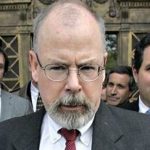