As if John Durham’s long record of investigating corruption was not already an indicator of his qualifications, he has just proven that he fully intends for his investigation to go as far as it needs to.

It has been revealed that the U.S. Attorney for Connecticut, as part of his probe into the origins of the “Russian collusion” hoax and the illegal surveillance of President Trump, will interview both John Brennan and James Clapper.

As the former CIA Director and former Director of National Intelligence were two of the biggest players in the original hoax and subsequent investigation, they could be the keys to the entire conspiracy unraveling. By now both men, and others who were involved, probably realize just how much is at stake and what Durham is willing to do; now only time will tell if they will finally confess to the truth, or go down with the ship.

Daily Caller: Brennan And Clapper To Be Interviewed As Part Of Investigation Into Russia Probe Origins

U.S. Attorney John Durham intends to interview former CIA Director John Brennan as part of his investigation into U.S. intelligence agencies’ activities in the Trump-Russia probe, according to NBC News.

Brennan told NBC News, where he is an analyst, that both he and James Clapper, the former director of national intelligence, are sought for interviews with Durham’s investigators. The interviews, should they occur, would signal that Durham is expanding his investigation.

Attorney General William Barr appointed Durham to oversee an inquiry into U.S. agencies’ Trump-related intelligence-gathering activities earlier this year. Barr said he was not satisfied with official explanations about the origins of the investigation into possible ties between the Trump campaign and Russian government.

But Brennan, a staunch critic of President Donald Trump and Barr, has fiercely defended the investigation of the Trump campaign. He is also questioning the legal basis for the Durham probe, which he called “bizarre.”

“I don’t know what the legal basis for this is,” he told NBC News.

“I’m very comfortable with everything I was involved in,” he added.

Barr has said little in public about the investigation, but it reportedly centers on FBI and CIA activities before and during the Trump-Russia collusion investigation. Durham is also reportedly looking into what involvement foreign governments might have had in intelligence-gathering against Trump associates.

The Durham probe has picked up steam in recent weeks, with Barr and Durham visiting Italy in September, reportedly to collect information about Joseph Mifsud, a Maltese professor who had contacts with former Trump adviser George Papadopoulos.

Durham has also expressed a desire to interview CIA analysts who gathering intelligence about Russian meddling in the 2016 election, according to NBC. Some CIA employees have hired attorneys in anticipation that they will be interviewed.

Durham’s probe is similar to one being conducted by the Justice Department’s Office of the Inspector General.

The FBI relied heavily on the infamous but unverified Steele dossier in the FISA applications. The New York Times reported Saturday that Horowitz’s investigators have asked witnesses about an MI6 assessment provided to the FBI that raised questions about the judgment of Christopher Steele, the former British spy who authored the dossier.

Durham has also asked witnesses why the FBI relied on the dossier as part of the Trump-Russia investigation, according to The Times. 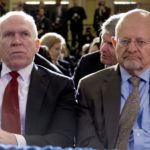