After President Trump posted a cryptic Tweet in which he simply declared that “something very big has just happened,” numerous news reports seemed to indicate that this message has something to do with the current status of Al-Baghdadi.

Newsweek reported that President Trump ordered a “special ops raid” in the Idlib province of Syria, located in the country’s northwest, of which Al-Baghdadi was the target. The raid occurred Saturday night, was approved by President Trump last week, and lasted roughly two hours.

The raid was primarily an air raid in which eight helicopters were involved, which sustained enemy fire during the operation. Breaching charges were used to enter the secured compound, at which point the American troops began killing or capturing enemy combatants. Although no Americans were harmed, one American military dog was injured. President Trump said that he, along with Vice President Mike Pence and other Cabinet members, watched the raid in real-time from the Situation Room.

In his Sunday morning announcement, President Trump stated that advanced facial recognition technology confirmed that it was in fact Al-Baghdadi they had found; when he was cornered by the American forces in an underground tunnel, he committed suicide with an explosive vest. Al-Baghdadi killed three young children that he had dragged into the tunnel with him, while eleven other children in the compound were rescued.

In his speech, President Trump praised the efforts of the United States military and intelligence community that ultimately brought al-Baghdadi to justice. He also acknowledged the great international collaboration on this operation with several other countries, including Russia, Turkey, Syria, and Iraq, as well as Kurdish forces in the region.

This could very well mark the final obstacle that needed to be cleared to ensure the complete and total destruction, after the physical caliphate was eradicated earlier this year. And this can only be described as a total victory for President Trump’s approach to foreign policy, which has proven far more effective at eliminating terrorists and providing stability and peace than any of the approaches taken over the course of the last 18 years.

The United States military has conducted a special operations raid targeting one of its most high-value targets, Abu Bakr al-Baghdadi, the leader of the Islamic State militant group (ISIS), Newsweek has learned. President Donald Trump approved the mission nearly a week before it took place.

Amid reports Saturday of U.S. military helicopters over Syria’s northwestern Idlib province, a senior Pentagon official familiar with the operation and Army official briefed on the matter told Newsweek that Baghdadi was the target of the top-secret operation in the last bastion of the country’s Islamist-dominated opposition, a faction that has clashed with ISIS in recent years. A U.S. Army official briefed on the results of the operation told Newsweek that Baghdadi was killed in the raid. And the Defense Department told the White House they have “high confidence” that the high-value target killed was Baghdadi, but further verification is pending.

Members of a team from the Joint Special Operations Command carried out Saturday’s high-level operation after receiving actionable intelligence, according to sources familiar with the operation. The location raided by special operations troops had been under surveillance for some time.

On Saturday night, after the operation had concluded, President Trump tweeted: “Something very big has just happened!” The White House announced later that the president will make a “major statement” Sunday morning at 9:00 a.m.

Baghdadi, an Iraqi national, is an ultraconservative cleric who became active in the Islamist insurgency against U.S. forces following the 2003 invasion that toppled Iraqi President Saddam Hussein. He was held by U.S. forces in the detention centers of Abu Ghraib and Camp Bucca, where a number of future jihadi leaders rubbed shoulders while in military custody.

He went on to join Al-Qaeda in Iraq, rising up the ranks of the violent group as it merged with others to form the Islamic State of Iraq and eventually inherited its leadership in 2010, when his predecessor was killed in a joint U.S.-Iraqi operation. As the group took advantage of a U.S. military exit to further expand, he renamed the group to the Islamic State of Iraq and al-Sham—or the Levant—better known as ISIS, in 2013, seeking to expand to neighboring Syria, where a civil war was raging.

Baghdadi’s forces made lightning gains across both Iraq and Syria, and in 2014 he declared his group a global caliphate from the Grand Al-Nuri Mosque in Iraq’s second city of Mosul in his only known public appearance as ISIS leader. Officially known from then on simply as the Islamic State, the group began to grab world attention not only for atrocities committed across the region, but in high-profile strikes on civilians in the West as well.

The United States involved itself in Syria by backing groups trying to overthrow President Bashar al-Assad in an uprising also supported by Turkey and other regional powers. The Pentagon began to realign itself by partnering with the Kurdish-led Syrian Democratic Forces as ISIS grew increasingly powerful, Islamists overtook the opposition and Russia joined Iran in backing Assad against these factions.

Rival campaigns led by the Syrian government and the Syrian Democratic Force were launched to defeat ISIS, which began to lash out abroad with bloody attacks in France, Germany, the United Kingdom and beyond. The perpetrators of at least three mass killings in the U.S. professed their allegiance to ISIS.

Something very big has just happened!

The group began to lose ground in both Iraq and Syria in recent years, however, with a U.S.-led coalition, Iran and Russia among the international powers hunting for Baghdadi. Though various, conflicting reports have been offered as to his fate and whereabouts, no single government has acknowledged any knowledge.

The most persistent of these reports involved him being in the so-called Jazeera region. Once a hotbed for ISIS activities, the area was often described as being in poor health condition. The region was seized by the U.S.-backed Syrian Democratic Forces—yet Baghdadi was nowhere to be seen.

“Baghdadi being in Syria follows his presumed pattern of life operating between Iraq and Syria,” a former senior counterterrorism official, who has tracked and supported the capture of operatives traveling from Pakistan to Iraq and Turkey, told Newsweek. “If he is dead, that would be a tremendous blow to ISIS, especially if other seniors leaders were killed during this operation.”

As recent as February, Vice-Admiral Igor Kostyukov, head of the Russian general staff’s Main Intelligence Department, told the state-run Tass news agency that Baghdadi’s “whereabouts are unknown,” but “he is definitely not in Idlib.” The site is the base of operations for Hayat Tahrir al-Sham, a rival jihadi group with ties to Al-Qaeda’s former Nusra Front, headed by Baghdadi’s former associate, Abu Mohammed al-Jolani, who refused to join ISIS in a move that created a major rift among the militant groups.

Assad himself was seen on a rare visit to the frontlines of Idlib province in footage released Monday. The Syrian leader told his troops “that the Idlib battle is the core to decisively end chaos and terrorism in all of Syria” and vowed to defeat the array of rebel groups there while also teaming up with Kurdish-led forces against any Turkish-led attempts to push further into northern Syria.

Facing nationwide defeats at the hands of the government and its allies, a number of Syrian rebel groups have opted to reorganize themselves with the support of Turkey. Ankara has mobilized these fighters to battle the Kurdish People’s Protection Units (YPG), the main component of the Syrian Democratic Forces, considered a terrorist organization by Turkey due to alleged links to the banned Kurdistan Workers’ Party (PKK).

Though Trump has withdrawn U.S. Special Forces from northern Syria, he has called for some troops to remain elsewhere in eastern Syria, where much of the country’s oil reserves remain under Kurdish-led control. A convoy of U.S. military vehicles was seen rolling through the city of Qamishli on its way to eastern Deir Ezzor province.

Turkey has since halted its incursion following back-to-back deals with the U.S. and Russia, which has sought to restore Assad’s authority at the country’s northern border and facilitate a YPG withdrawal. This process remains ongoing, though reports remain of sporadic violence between the two factions, something that some critics of the U.S. exit worried may give ISIS a chance to resurge.

Asked how Baghdadi’s death may affect the U.S. withdrawal, the former senior counterterrorism official told Newsweek, “If you are leaving you want to try to find your targets before you leave.” 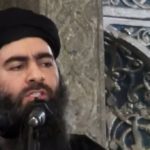