Today, in a truly historic occasion, President Trump oversaw the signing of two major peace deals in the Middle East. On the White House South Lawn, President Trump hosted Prime Minister of Israel Benjamin Netanyahu, and representatives of the governments of the United Arab Emirates (UAE) and Bahrain, as the state of Israel formally normalized relations with both of the Arab states.

Both deals were announced within one month of each other, making the UAE and Bahrain only the third and fourth Arab nations in history to normalize relations with Israel, after Egypt in 1979 and Jordan in 1994. The deals not only mark a significant turning of the page in the history of the Middle East, with the promise of more peace and prosperity in the region, but along with the equally historic Kosovo-Serbia peace agreement, will surely cement President Trump’s place in history as a peacemaking President. 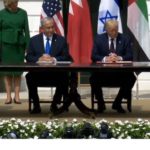