Former presidential candidate and renowned businessman Herman Cain has sadly passed away at the age of 74 today, due to health complications partially involving the Chinese coronavirus.

Cain had been suffering from other health issues prior to contracting the Wuhan virus, including colon cancer that had since spread to his liver. At the time of his passing, Mr. Cain was serving as one of the co-chairs of “Black Voices for Trump,” in support of President Donald Trump’s re-election bid.

Mr. Cain had a long and successful career as a business executive, drastically improving sales performances as the manager of over 400 Burger Kings in Philadelphia, and later becoming the CEO of Godfather’s Pizza, a position he held for 10 years. As one of the most prominent African-American success stories in recent memory, Mr. Cain had been featured in Larry Elder’s new film “Uncle Tom,” which focused on some of the most successful black conservatives in America today.

Mr. Cain ran for President in the 2012 Republican primaries, where he became widely known for his “9-9-9” tax plan, advocating for a complete overhaul of the American tax system in favor of only three very simple taxes: a 9% personal income tax, a 9% federal sales tax, and a 9% corporate tax.

Mr. Cain, like future President Trump, was a political outsider who planned to bring the efficiency and pragmatism of a businessman to the presidency. He briefly became the frontrunner in some polls, before highly suspicious and unsubstantiated sexual misconduct allegations by leftist activists ultimately forced him to drop out. The Left continued their vicious attacks against him in later years as he became a vocal supporter of President Trump, but Mr. Cain’s loyalty and patriotism never wavered.

Herman Cain’s story was the quintessential American Dream, and his contributions to American politics in the early 21st century were valuable. He will be dearly missed by all of us, as we continue fighting for the same things that Herman Cain believed, and exemplified, all his life. 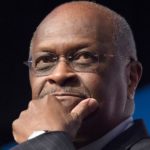