General Mike Flynn, the patriot who has been completely railroaded by the federal government in the aftermath of the “Russian collusion” hoax, has withdrawn his original guilty plea to one count of making false statements to the FBI.

In a motion filed with the D.C. District Court, General Flynn’s defense team has declared that he is withdrawing the plea from November 2017 due to “the government’s bad faith, vindictiveness, and breach of the plea agreement.”

Even after government prosecutors went out of their way to destroy his life and end his career over a Deep State-manufactured hoax, General Flynn was still willing to cooperate with investigators in order to prove his innocence and his decency. But after the government eventually betrayed the plea agreement in an attempt to get General Flynn a harsher sentence, the General and his team were left with no choice but to fight back in their own way.

Even after nearly three years, General Flynn is still showing no signs of giving up in his pursuit of justice and the truth, and that is the most admirable quality of all. 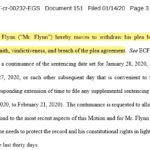