Judge Emmet Sullivan, the corrupt judge overseeing General Michael Flynn’s case, has responded to the D.C. Circuit Court of Appeals’ request that he explain his actions in refusing to dismiss the case against General Flynn.

In the official filing of the response, Sullivan falsely claims that Flynn “repeatedly swore under oath that he committed the crime,” even though evidence has since emerged that Flynn was pressured into the guilty plea by the FBI, who threatened to go after his son if he didn’t plead guilty. Sullivan further asserts that the case is essentially his business alone, and that the higher court has no authority to get involved, which is another false statement and is, in fact, unconstitutional. 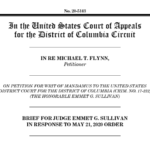