In a breaking development in the trial of General Michael Flynn, the United States Court of Appeals has ruled that Judge Emmet Sullivan must hear the emergency writ of mandamus ordering that he vacate the charges against General Flynn. The order comes from Judges Henderson, Wilkins, and Rao of the D.C. Court of Appeals.

After the Department of Justice announced that it was dropping the charges against General Flynn, Judge Sullivan decided to try to prosecute the case himself, and enlisted a retired Obama-era judge to act as a de facto prosecutor in the DOJ’s stead. As a result, Flynn’s legal team, led by Sidney Powell, filed an emergency writ of mandamus demanding that Judge Sullivan, clearly blinded by his own biases, needed to be removed from the case altogether.

Now, as a result of the Appeals Court’s order, Judge Sullivan will be forced to hear the Flynn team’s motion to dismiss him, and must do so within the next 10 days. 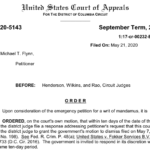