In response to the explosive revelations that the government deliberately withheld evidence that would have exonerated General Michael Flynn, a federal judge has cancelled a planned November hearing in General Flynn’s case.

Last week, Flynn’s lawyer Sidney Powell filed a 37-page brief that included numerous documents and other evidence proving that there was a coordinated government cover-up of evidence in General Flynn’s favor. This stunning reveal has the potential to implicate senior officials in the Obama Administration, and could go all the way back to the heart of the Obamagate scandal. 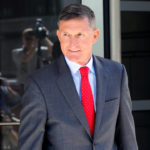