And then there were two…or three.

Massachusetts Senator Elizabeth Warren, AKA “Fauxcahontas,” has dropped out of the presidential race, becoming the fourth candidate in five days to do so. Whether it was due to her abysmal performances – even coming in third place in her own home state – or because of internal party pressure like the others, her withdrawal now leads to a final showdown between the top two candidates: Joe Biden and Bernie Sanders.

Hawaii Congresswoman Tulsi Gabbard is the only other candidate still left in the race, but she is irrelevant and has no shot at being the nominee. Now, after 26 other candidates have come and gone, the field is down to its final choice for who will be defeated by President Trump in November: A senile career politician who can’t remember where he is half the time, or a raging socialist who is determined to destroy America as we know it. Either one would be a terrible choice, which is exactly why President Trump’s victory is all but guaranteed. 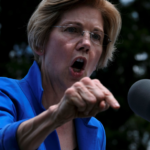