After several years, the Department of Justice has finally acknowledged one of the clearest truths in the entire Obamagate scandal: That the original FISA warrant applications for Trump campaign aide Carter Page lacked probable cause, and thus were illegal.

The DOJ’s declassified report, released by the Foreign Intelligence Surveillance Court yesterday, confirms that the warrants were only approved on the basis of outright lies and false information presented by the Obama-era FBI, courtesy of the debunked “Steele dossier.” Were it not for these falsehoods being presented before the FISA court, the warrants would never have been approved.

This development should provide a shot in the arm for all those who are actively pursuing justice in the case of the biggest political scandal in modern history. There are many possible reasons why U.S. Attorney John Durham’s investigation is now a criminal investigation, and this surely will be one that Durham will not miss in his final report. Justice will be done. 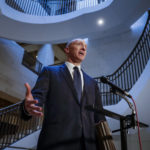