After caving to pressure from the far-left within her party and within the Democrats’ base, Speaker Nancy Pelosi will allow for a formal vote on impeachment later this week…except it’s not really an impeachment vote.

All that will happen, allegedly, is a “formalizing” of investigative procedures by House Committees in response to calls for impeachment, while still not actually sending the matter to the Senate just yet. This is yet another bending of the rules and violation of the process by Pelosi, who is still struggling to keep the radicals happy while also not sacrificing the moderates in her caucus. But sooner or later, she will not be able to do both at the same time.

Read the full text of the resolution here. 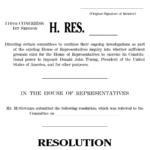