In what appears to be the very end of General Michael Flynn’s long and hard-fought battle against the Deep State, the General has emerged victorious at last. It has been confirmed that the D.C. Circuit Court of Appeals has ruled, by a 2-1 margin, in General Flynn’s favor, declaring that the Department of Justice has the right to drop its prosecution of his case. With it Judge Emmet Sullivan’s highly unconstitutional de facto prosecution of the case must come to an end.

The ruling specifically orders Judge Sullivan to dismiss the case immediately, and also immediately vacates the “amicus” appointment of former Judge John Gleeson, whom Sullivan had brought in to essentially act as a stand-in for the DOJ’s prosecutors after they dropped the case.

At long last, an American patriot who has been wrongly accused as part of the greatest political scandal in modern history has finally gotten the justice he deserves. 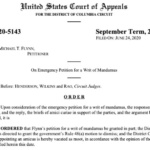