President Trump has just announced on Twitter that he will be selecting his new Chief of Staff, and the choice could not be a better one: Congressman Mark Meadows, of North Carolina’s 11th congressional district.

This is an excellent choice going forward with the remainder of President Trump’s first term, and his all-but-guaranteed second term. Chief of Staff is one of the most important positions in the White House, and Congressman Meadows is a perfect example of a Chief of Staff who will fulfill one of President Trump’s signature campaign promises: Draining the Swamp of the federal government. 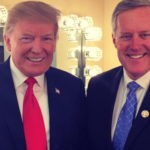