After nearly a whole month, the illegal anarchist “autonomous zone” located in the heart of Seattle, Washington is finally being retaken by the Seattle Police Department.

The SPD released a statement on Twitter confirming that the leftist Mayor Jenny Durkan, after initially supporting the autonomous zone and falsely labeling it a “peaceful protest,” had issued an executive order allowing the police to completely vacate the area of any and all remaining protesters. Durkan had previously asked the protesters to leave by the end of June, but many of them refused to obey her.

The police issued a final warning early Wednesday morning announcing that the zone would be cleared out, and anyone who remained behind would be arrested. As of this morning, numerous videos have emerged of riot police advancing through the neighborhood and forcing Antifa protesters out of the area, arresting those who resisted.

The decisive move comes after four shootings occurred within the zone over the course of ten days, which has resulted in six casualties, with four injuries and two fatalities. Half of the victims were teenagers, with the two fatalities being a 19-year-old man and a 16-year-old boy (both African-American), and a 17-year-old and a 14-year-old being among the injured. 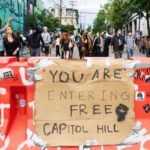 BREAKING NEWS: CHAZ is Being Retaken