A federal appeals court in Boston, Massachusetts has overturned the death penalty to which Boston bomber Dzhokar Tsarnaev had been sentenced.

The ruling was made by a three-judge panel of the appeals court, consisting of two Obama-era appointees (Rogeriee Thompson and William Kayatta) and one Reagan-era appointee (Juan Torruella). The decision to overturn the sentence following Tsarnaev’s conviction in 2015 was met with condemnation by survivors and family members of the victims of the 2013 bombing, which killed three people and injured hundreds.

Tsarnaev, along with his older brother Tamerlan, carried out the attack specifically because of their radical Islamic beliefs, even though the prosecutor in his case tried to falsely claim that this wasn’t true. As Dr. Gorka explained in his report on the case, U.S. v. Dzhokar Tsarnaev, the Boston bombing was the latest in a long series of Jihadist attacks carried out against the United States, and as such, the death penalty is more than warranted for Tsarnaev. 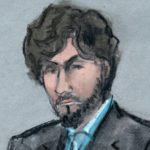