The race for the Democratic Party’s presidential nomination in the 2020 election is finally over. Socialist Senator Bernie Sanders of Vermont has suspended his campaign, thus leaving former Vice President Joe Biden completely unchallenged for the nomination.

After 27 other candidates came and went, it was down to Biden and Sanders, with both men competing to see who could run farther to the Left. Although Sanders initially appeared to be the frontrunner after winning the first three primary contests, the Democratic National Committee worked to prevent him, once again, from winning the nomination, with multiple candidates suddenly dropping out right before Super Tuesday and getting behind Biden.

Sanders is set to make the announcement official in his hometown of Burlington, Vermont, at 11:45 A.M. EST today. 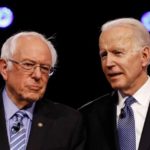