President Trump has just announced via Twitter that Attorney General William Barr “will be leaving office just before Christmas,” roughly one month before Inauguration Day 2021. 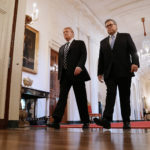 BREAKING NEWS: AG Barr stepping down, to be replaced by Jeff Rosen