The recent decision by the Democrats of the House Judiciary Committee to hold Attorney General William Barr in contempt of Congress is not only the latest example of the party’s dramatic overreach, or abuse of power against political opponents, or proof of their undying devotion to a debunked conspiracy theory; it is also yet another example of their sheer hypocrisy.

For all the Democrats’ endless ranting about a “constitutional crisis” or demands for impeachment, the alleged improprieties of Bill Barr – even if they were crimes (which they’re not) – pale in comparison to the shady actions of one of his most recent Democratic predecessors: Eric Holder of the Obama Administration.

The same Democrats who now see corruption where there isn’t any, failed to see real corruption when there was some. Those who now see a crime that is non-existent provided excuses for real crimes. And those who show no respect to one who has earned it showered endless praise on one who didn’t deserve it.

Some may try to say that these two instances are just two sides of the same coin, with many parallels: Two Attorneys General held in contempt of Congress, and both subsequently causing their respective presidents to invoke executive privilege for the first time in either of their presidencies.

But do not be fooled. Aside from these extremely superficial similarities, there could not be a larger divide between the actions of Holder and the actions of Barr. Here’s just a few of the major differences between Bill Barr and Eric Holder, all proving which of the two is the truly honorable man and enforcer of the law of the land, and which one is a corrupt charlatan who focused more on personal favors than on defending the Constitution.

One key difference between Barr and Holder is that Barr understands the importance of loyalty to the office he serves, and the Constitution that he has sworn to protect.

He has firmly stood behind the authority of the Executive Branch, and thus maintains that the office of the Attorney General – as part of that branch – is supposed to serve the office of the President. This does not make him a sort of “personal lawyer” to the President despite the Democrats’ charges of the same; it simply means that Barr understands the Constitution.

He even wrote a report in 1989 on the subject of encroachment by the legislative branch on the powers of the executive branch, emphasizing why these two should remain separate. How prescient such a report would turn out to be 30 years later, not to mention further proof that he cares much more about the office than the man occupying it.

By contrast, Eric Holder did not mince words when it came to the subject of his own personal loyalties while he reigned as the country’s chief law enforcement official.

Less than a year after becoming the first sitting Cabinet official in American history to be held in contempt of Congress, Holder gleefully declared in an interview with Tom Joyner that he was “still the President’s wing-man, so I’m there with my boy.”

Holder took one of the most important executive positions in the country and turned it into a “bromance” with the man occupying the Office of the President, based solely on a personal – not professional – relationship. Such blind loyalty to a name rather than a title, especially with such an incredibly powerful position at stake, only guarantees corruption and abuses of power.

2. Real Pain in the Real World

Despite what some agenda-driven members of the mainstream media might say, the end of the phony Mueller investigation is not a “day of infamy.” Not simply because it turned out to be a giant waste of time and a nonsensical conspiracy theory from the start, but because no one died as a result. As atrocious as this collusion delusion has been – and as much as it has ruined some lives – it has not taken a life.

And while Barr does not have any blood on his hands, the same cannot be said for Eric Holder.

The major scandal Holder is responsible for was the infamous “Fast and Furious” operation. When the ATF decided to embark on a five-year operation to deliberately give guns to cartel members, drug dealers, and other criminals from Mexico (ostensibly for the purpose of tracking them), it should have been plain as day that sooner or later it would end in disaster. And it did.

Not only did thousands of the guns ultimately disappear and never turn up again, but a brave American lost his life to one of those very same guns: Border Patrol agent Brian Terry, who was killed in December of 2010, leaving behind a grieving family.

Perhaps the single most important thing about William Barr that the media coverage constantly “forgets” is that he is no stranger to the office of the Attorney General. He held this position once before, serving during the administration of George H.W. Bush. Holder does not have that distinction.

The seniority that Barr can boast over Holder is clear. Barr was the top DOJ official before Holder even started working at the Justice Department.

It would be one thing if Barr had never held the position before like Jeff Sessions, or was a total political outsider like former Secretary of State Rex Tillerson. But the fact that Barr has already served as Attorney General once before only makes the Democrats look even more transparent and desperate in their attempts to slander him.

There were no complaints of his performance or accusations of bias or impropriety in his first tenure, and for them to accuse a two-time Attorney General of not understanding the duties and powers of the office is laughable. It only further proves that their motivations are not to get Barr, because they aren’t really going after Barr; they’re trying to take down his boss, President Donald J. Trump.

That too is a major reason why President Trump hired a former Attorney General to serve once again, rather than trusting another political newcomer. And that is one more reason why we should be all the more grateful that William Barr is the Attorney General of the United States, and that Eric Holder no longer is. 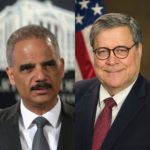