The manner in which Big Tech bans prominent conservatives and right-wingers can be seen as following a clear pattern which comes and goes in waves, with each wave often dominated by one major figure whose ban causes some outrage but ultimately little action.

These more high-profile bans are often masked by the simultaneous banning of legitimately fringe figures around the same time, including white nationalist Jared Taylor, anti-Semite Paul Nehlen, and the alt-right personality Anthime Gionet (known as “Baked Alaska”). Sometimes these bans are also accompanied by the large-scale bannings of thousands of conservative accounts that are falsely labeled as either “Russian bots” or “neo-Nazis.”

But in 2019, Big Tech has taken its largest and most direct steps yet to blatantly censor those with whom they simply politically disagree. With past bans of figures as Yiannopoulos or Jones, they at least tried to give a reason that included some sort of violation of their Terms of Service. This time, they have decided to forgo any sort of excuse and are just banning people because they can.

In what Raheem Kassam has bluntly described as the “day of the long knives,” a slew of prominent right-wing figures were suddenly and inexplicably banned from Facebook and Instagram (the latter which is owned by the former) in early May.

Those targeted included Jones (who had attempted a comeback after being previously banned in 2018), Yiannopoulos (who was still active on those sites even after his Twitter ban), British YouTuber Paul Joseph Watson (who works for InfoWars), and activist Laura Loomer (who previously worked for The Rebel Media and Project Veritas). The only justification given for the blanket banning of so many prominent voices was that they were considered “dangerous” by Facebook. The social media giant went even further in their efforts to ban “wrongthink,” declaring that anyone who even shares InfoWars content will also be banned.

The bans were not exclusive to Facebook and Instagram. Over on Twitter, the prominent conservative actor James Woods was also banned, as was the “AOC Press” account, a popular parody account of Representative Alexandria Ocasio-Cortez; the owner of the parody account, Michael J. Morrison, was also banned. Lastly, the veteran conservative author and former member of the “New Left” David Horowitz saw his Twitter account suspended twice in one week.

Woods was reportedly banned for a tweet that simply quoted Ralph Waldo Emerson, with no other reason given. Twitter also claimed that the “AOC Press” account was in violation of its Terms of Service regarding parody accounts, although they have failed to give even a single explanation of why this was so. The account followed the rules exactly by clearly stating itself to be a parody account, including the word “parody” in both its handle and its description. Similarly, no reason has been given as to why Morrison’s personal account was also banned.

Naturally, there has been some serious backlash against this latest round of unjustified “unpersoning” of some of the Left’s favorite targets, including from the President of the United States. President Trump not only lashed out at the Big Tech companies for the bans of Woods and Watson in particular, but also showed open defiance for the blacklisting of such content by retweeting several tweets from Watson and another right-wing commentator who has also been threatened with bans in the past, Canadian activist Lauren Southern.

The President even shared a video from InfoWars – a montage depicting Trump supporters expressing non-violence and tolerance in the face of hatred from anti-Trump protesters – on his Twitter feed, as if daring the tech oligarchs to come after him next.

However, on top of the nearly unanimous support for such bans from the Left – all too eager to see their opposition silenced – there has been no shortage of subservient “conservatives” who continue to claim that these tech giants somehow have the right to ban people at will.

Some dismiss the latest free-speech victims as not even being “real conservatives,” but “reactionaries;” others equate calls for social media fairness as demanding that “government regulate private companies;” and some say that policies aimed at promoting free speech on social media will somehow “backfire the second conservatives are no longer in office.”

If all of these arguments could take on a physical form, it would be the same kind of rubbish that should be promptly thrown down Alexandria Ocasio-Cortez’s garbage disposal.

There are many reasons why the government absolutely has a right to step in and enforce freedom of speech on the Internet’s biggest platforms, with three in particular that truly stand out.

Additionally, companies like Amazon receive additional government assistance in the form of over $1 billion in tax breaks, as well as government-funded food stamps for its workers.

It would only make sense that companies receiving such generous government benefits would then comply with certain government regulations, especially in regards to access to a freedom that is guaranteed in the very first amendment to the United States Constitution. The government is already heavily involved in these companies, so it undoubtedly has a right to get involved further; only this would be on behalf of the people, for once, rather than the investors and CEO’s who benefit from such tax breaks and benefits.

These various companies unquestionably fall into the definition of a monopoly, just as much as J.D. Rockefeller’s Standard Oil Company did. In particular, each of the major tech giants can claim a monopoly over each particular corner of the Internet in which they specialize:

As such, one look at these giants’ treatment of potential competitors should be more than enough to obliterate any misguided argument that the “free market” will eventually allow challengers to arise against these technological tyrants.

Take, for example, Gab: A micro-blogging website founded in 2016 with an emphasis on free speech for all users, with the exception of extreme cases such as threats of violence and other explicitly violent speech. For a short period of time, Gab was rising in popularity as an alternative to Twitter.

In response, the tech giants came together to coordinate a very effective obstruction of Gab’s rise: The mainstream media collectively (and falsely) labeled Gab to be a “white supremacist” site, which eventually led to both Apple and Google removing it from their respective app stores, making it all but impossible to use on mobile devices and thus significantly blunting Gab’s momentum. Now, Gab remains nowhere near the size and influence of Twitter.

Another example is Minds, a generic social media site founded as an alternative to Facebook, with an emphasis on free speech and guaranteed privacy rights for all users. When Minds also began rising to a level that was concerning for Facebook and others in the Big Tech circle, Google inexplicably removed the website from its search engine, instantly rendering it much more difficult to even locate, much less use. Minds too, like Gab, remains light years away from reaching the same scale as Facebook or Twitter.

At stake here, above all else, is the Freedom of Speech, the very first right guaranteed in the Constitution. As Kassam noted in his aforementioned Human Events piece, for many of these individuals – including Yiannopoulos, Loomer, and British activist Tommy Robinson – social media has provided them with their primary platform from which their voices can be heard. Thus, removing them so suddenly and unjustly directly affects their ability to speak, as well as their livelihoods.

It goes without saying that times have changed quite dramatically since 1776. Gone is the day of “town squares,” and here to stay is the day of social media as the new public platform for free expression. Could the Founding Fathers have possibly accounted for a future where the primary channels of public expression are heavily regulated by something other than the government? Would Donald Trump have had as much success in his campaign, or effectiveness with messaging as President, if he was banned from Twitter? Clearly not.

At the end of the day, individual liberties and civil rights trump the so-called “free market.” And there is indeed a very strong precedent for this: A little something you may have heard of, called the Civil Rights Act of 1964.

To be sure, there were individuals at the time, such as Senator Strom Thurmond, who made the same complaint that the bill would allow for unprecedented intervention by the federal government into the free market, supposedly infringing on the rights of schools and businesses to do as they please.

But in that battle, like the battle of today, a lot more was at stake than the economy; the future of civil liberties, and the very soul of the nation as we know it, was – and still is – at stake. We took a stand in 1964 to enforce equal opportunity rights for all Americans, regardless of what business owners or George Wallace may have protested otherwise. Yes, it absolutely did involve government intervention, but it was also unquestionably the right thing to do. And today, the Civil Rights Act remains law; nobody is calling for it to be repealed for fear of “government intervention,” because as time has gone on, history has proven those who opposed this bill to be wrong.

Big Tech censorship is the new segregation, blatantly denying one group access to the same thing it gives to others, on the equally discriminatory basis of political beliefs instead of skin color. Just as with segregation, our identity as a nation, what we truly stand for, and how far we are really willing to go in our fight for freedom, rests on this moment. That is why immediate government intervention is the only way we can truly fight social media censorship; don’t let any “free market”-based pedant tell you otherwise. 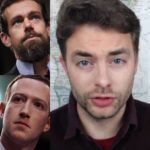