The media in this day and age is loaded with hacks pretending to be journalists, propagandists acting like reporters, and activists who claim to be unbiased. Most anchors and commentators across the mainstream media have clear left-wing biases, with some being open about this and others pretending they’re neutral.

As such, there are too few genuine voices of truth, reason, honesty, and decency on TV, in print, and on the Internet today. It is more important than ever before to be fully informed as to who these trustworthy figures are, to whom you can turn for hard-hitting, genuine reporting, as well as bold and unapologetic conservative commentary that is not heard nearly enough. 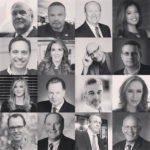