Brazil’s newly elected nationalist-populist leader, Jair M. Bolsonaro, has vowed to rid Brazil of the “Marxist garbage in [Brazil’s] schools.” Adding on Twitter that, “We shall succeed in forming citizens and not political militants.” Bolsonaro’s tweet yesterday was prompted by the fact that Brazil has long endured one of the “lowest spots,” according to Bolsonaro, of global educational rankings. He rightly assesses the scourge of Cultural Marxism as the source of their turgid educational system (and the reason for many Brazilians not contributing to their society the way that an educated population of the largest and most dominant state in South America should.

As Andrew Breitbart wrote about in his 2012 book, Righteous Indignation: Excuse Me While I Save the World, Cultural Marxism a derivation of the Marxist-Leninism which tore the world apart in the previous century. The difference is (just as the name suggests) that, the line of attack for the Cultural Marxists today is slightly different from the Marxists of yesteryear: the former group has essentially abandoned the economic critique classical Marxists had of Western capitalism. Instead, the Cultural Marxists have striven to institute their revolution by capturing the “high-ground” of culture.

Just as happened here in the United States, the Cultural Marxists in Brazil (and throughout the Developing World), stormed the undefended ramparts of mass media, academia, government bureaucracy, and the legal fields. Theirs was a much longer-term program of systematically managing their fellow citizens’ perception of political affairs in order to bring about lasting, revolutionary change.

As Michael Walsh wrote in his two books on the subject, The Devil’s Pleasure Palace (2015) and The Fiery Angel (2018), Cultural Marxism is more interested in the destruction of the “existing order of things” than they are in replacing it with anything meaningful. In fact, given the decades-worth of history of Marxist failures—across various countries and societies—it seems improbable that any Cultural Marxist with influence today truly believes that Marxism will work. Theirs is the revolution of cultural self-hate mixed with the desire to achieve historical retribution for the West’s purported sins, through the destruction of whatever country they call “home.”

Thus, Bolsonaro, like Trump (and so many throughout the world), is faced with a country that has been steadily declining—despite sitting atop a vast array of natural resources, enjoying a secure strategic position, and being the most populous country in South America. Just as in the United States, Brazil’s education system—the one place that is supposed to be the engines of future growth by creating tomorrow’s workers and innovators—is failing to do anything other than create people who want to destroy Brazil rather than contribute to its greatness.

It’s no surprise, then, that Bolsonaro, like Donald Trump, is hated by the “elite” in his country and castigated as a dangerous radical by the globalists. He, too, supports national sovereignty and wants to serve only his country’s national interests. Yet, the Cultural Marxists who dominate the global elite see that as a direct threat to their agenda of destruction.

Saul Alinsky was a purveyor of Cultural Marxism in the 1960s. He infamously wrote The Rules for Radicals in which he dedicated the book to Lucifer (seriously) and his work inspired Barack Obama as well as Hillary Clinton, as Dinesh D’Souza has pointed out. Since the Left’s goal was the destruction of the West by destroying the middle-class, Alinsky reasoned that the politics of guilt and shame were the best ways to destroy the prosperous middle-class.

On this issue, unfortunately, Alinsky, was right.

After the 1960s, Cultural Marxists rose to power globally. Once ensconced in power, these individuals assiduously worked to break down the existing order and weaken the nation-state. Sadly, Brazil has suffered greatly.

How many Brazilian lives were robbed by having their jobs shipped overseas (in the name of “free trade” or environmentalism)? How many Brazilians watched their children go from being the promise of a better future into the destroyers of their homeland? How much prosperity was lost due to the Cultural Marxists’ grip on power in Brazil?

Brazil is the canary in the coalmine for the #MAGA coalition in the United States. So many of the problems facing the United States today, thanks to the deleterious reign of the globalists, has been experienced tenfold in Brazil. Whether the Bolsonaro program for repairing the decades-worth of damage to Brazil works may signal how effective President Trump’s own programs for fixing America will be.

In this way, we should all be rooting for Bolsonaro to succeed. 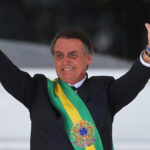 Balsonaro Takes On “Marxist Garbage” to Save Brazil