Ann Coulter has been loathed by the American Left for many years. Her works were known for their incisive analyses and cutting critiques of the American Left–every Democratic Party leader, from Bill Clinton to Nancy Pelosi has felt the burn of her invective. In 2016, she was one of the first major voices in the media to announce her support for Donald J. Trump’s presidential candidacy. Since his election, she has increased her already-sizable wealth considerably, thanks to her close association with President Trump’s brand.

A year ago, she published a book entitled In Trump We Trust and the last three years of Ann Coulter’s existence has been almost exclusively dedicated to advancing the Trump cause of ending illegal immigration to the United States; protecting blue-collar workers from unfair trade deals; and rolling back the incredible gains that the democratic globalists have made in the halls of power in the United States for decades.

Yet, very recently, Coulter went wobbly on President Trump. Several months ago, Coulter made the outré claim that she believed Donald Trump would be the last Republican president in her lifetime. She excoriated him for not be tougher against his political foes–although she never fully elaborated how Trump could be tougher, when even his own party and elements within his own administration were secretly operating against him. As the recent row between President Trump and the Democrats has escalated over the funding for the border wall and the government shutdown, Ann Coulter strangely started to sound as virulently anti-Trump as stalwart “Never Trumpers,” like Bill Kristol.

After months of back-and-forth; of trying to get the Democrats to take a more reasonable course, President Trump had no choice but to declare a national state of emergency along the broken southwestern border. As he did this, Trump also signed an expensive spending bill. Many conservatives were upset with the president’s decision to sign another such bill–including Coulter. During his powerful press conference in the Rose Garden of the White House last week, Coulter stated in a radio interview that the “only national emergency is that we have an idiot as a president.” She spent days piling on the president, arguing that he was a coward and was being led around by the Left. In the run-up to the president’s announcement, she also ridiculed the president for behaving as though he were George H.W. Bush; she also called him despicable epithets.

All of her bile was spewed across various national media platforms. And, for what purpose? Yes, Trump signed an unpopular spending bill. But, in so doing, he prevented himself from being boxed in the way he was during the unpopular government shutdown that lasted from December 2018 until February of this year. Initially, the president had tried to tie funding for the border wall to funding for reopening the government. The House Democrats would not have it and they won popular support for their position of opposing the government shutdown. Trump knew that he could not take that route again if he wanted to acquire the funds necessary for building the wall. So, he took the rational step of signing another spending bill that would keep the government open until September 20 of this year, but he also declared a state of emergency, in order to allow for his White House to move funds around to pay for the construction of the wall.

Democrats acted as though Trump had set their collective home on fire. A general rule of thumb is that, the louder and angrier the Democratic Party appears to be in response to President Trump, the more right the president usually is. That’s why it was so strange to see Ann Coulter also piling on the President with her Left-wing “friends,” like the HBO comedian, Bill Maher. It was doubly more perplexing to see Leftists of every stripe on social media and in the Fake News Industrial Complex fawn over Ann Coulter’s hate-filled, anti-Trump tweets from the last few weeks.

So, the question is: whose side is she really on?

Think about it: by declaring a state of emergency, irrespective of his decision to sign the massive spending bill to keep the government open, the president is ensuring that he will be able to build the wall. Over the last two years, Coulter has made many public statements about how she cares only about one thing: that Trump fulfill his campaign pledge to build an effective border wall. Well, this is a case of be careful what you wish for (because Ann Coulter just might get it). Few honestly believed that the Democrats, once in power in the United States House of Representatives, would ever accede to Trump’s desire to build an effective border wall. True to form, the Democrats fought him every step of the way. No one really thought that Trump would be able to build our wall without taking drastic steps. At the end of the day, Trump did exactly what Ann Coulter and so many of his loudest–earliest–supporters had called for: “JUST BUILD THE WALL!”

Coulter believes that Trump’s state of emergency was negated by his passage of the spending bill. But, it was not. The United States has declared multiple states of emergency–many of which remain in effect–for far lesser issues, going back to the Ford Administration. Not only have presidents from both parties declared emergencies in order to achieve policies that a hostile Congress wouldn’t support, President Obama declared an emergency over illegal immigration in 2014, in order to accomplish his goals of making it easier for illegal immigrants to be allowed into the United States. For every pundit claiming that no precedent existed for Trump to declare a state of emergency, all one need do is look no farther back in our history than to the presidency of Barack Obama.

Meanwhile, a state of emergency has been declared. Larger numbers of American troops are deploying to the border to counteract the massive influx of illegal immigrants and illicit narcotics flowing across that broken border. Coulter argues that Trump will have his plan squelched in the sclerotic and hostile court system. Yet, Trump’s other “controversial” decisions–such as his moratorium on travel from seven predominantly-Muslim countries–have been upheld by the Supreme Court. Several leading legal scholars–some of them Liberals–have argued that Trump is within his executive rights to declare a state of emergency.

Coulter, however, continues on her Bill Kristol-esque campaign of monomaniacal destruction against the man she had previously claimed she trusted implicitly. One must question her motives for the sudden change of heart. Was she ever truly onboard the MAGA train? After all, this is an individual who was an unquestioning supporter of George W. Bush’s wasteful Iraq War, and she supported RINOs, like Chris Christie and Mitt Romney for years. Her judgement is blinkered. What’s more, since she has a new book out and likely needs to sell many more copies, she is likely trying to play nice with the Fake News Industrial Complex leaders in order to ingratiate herself with them and be given the requisite airtime to speak about her new book.

Ann Coulter is a disloyal, charlatan who is unhappy even when she is in the process of getting what she claims to want. Perhaps Coulter was never serious about the wall at all? Perhaps it was all about the money. She can continue sitting on the sidelines sniping at patriots, like President Trump, while he continues fighting for that which he vowed to achieve: the protection of middle-class and blue-collar Americans from the destructive impacts of illegal immigration and the illicit narcotics trade from Latin America. 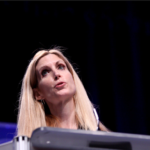