The White House Correspondents’ Association has just proven that it could care less about the First Amendment or the right to freedom of the press, in a shocking move that blatantly exposed their rank political bias.

In a statement posted by the WHCA’s Twitter account, the group declared that it had implemented its own “social distancing” rules to combat the spread of the Coronavirus, and that part of the compliance with these rules included banning reporters who do not hold a permanent seat in the White House Briefing Room.

The WHCA voted to ban a particular news outlet from seat rotation since, they claimed, reporters from that organization attended two recent briefings despite not holding a permanent seat. The news organization in question is the conservative cable news channel One America News Network (OAN).

It is not a coincidence that the left-wing WHCA voted to ban a conservative network, when surely OAN is not the only news organization that may have violated these arbitrary and only recently-revealed “rules.” This only further reflects their biases, which have been made even more obvious by recent declarations from such “journalists” as Jim Acosta, Chris Hayes, and Don Lemon, that they wish to censor the President and his press briefings because of their own personal dislike of him.

And of course, the WHCA took no actions when one of its members, Brian Karem of Playboy, insulted President Trump’s White House guests in the Rose Garden before he challenged your host to a fight.

The WHCA has rightfully faced intense backlash on social media, which demonstrates that the American people stand with real news sources like OAN, and not the left-wing hacks and grandstanders that make up the majority of the WHCA. 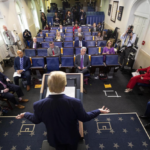