President Trump is working fast behind the scenes, not only to respond swiftly to the Chinese Coronavirus and keep Americans safe, but to punish China for its blatant mishandling of the outbreak and subsequent lies about the virus’ origins.

Reports are emerging that there is a massive plan in the works to forcibly remove American manufacturing and supply chains from China, either bringing them back home or moving them to friendlier countries.

The Commerce Department and State Department are considering economic incentives to convince various companies to leave China, and the President is also allegedly eyeing a new Pacific alliance of friendly nations that would take the economic outsourcing from China and equally distribute it among friendly nations, so that America is no longer dependent on a single nation which wants to undermine us. Among the possible nations that would constitute this economic grouping are Australia, India, Japan, New Zealand, and South Korea. 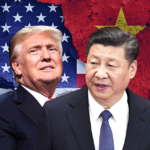