From Europe to the United States, the global trends continue toward economic and trade reopening sooner rather than later, as the world prepares to move on from the Chinese Coronavirus.

Several major European countries, including Denmark, Spain, and Austria have already begun to lift major restrictions on travel, business, and schools, signaling that the worst may be over.

In the United States, following the lead of Texas Governor Greg Abbott, multiple states are looking at reopening their respective economies within the coming weeks. As President Trump announced in yesterday’s press briefing, up to 20 states could receive the green light to reopen their economies before May 1st, which would be significantly ahead of schedule. The President further confirmed that he would be speaking to all 50 governors and coordinating each state’s reopening based on each of their respective conditions.

Although the originally-planned aspirational Easter deadline for reopening our country has passed, the Coronavirus horizon looks than previously thought and our collective ordeal may be over sooner than predicted. 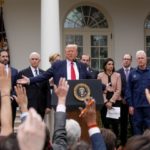