At President Trump’s most recent daily Coronavirus briefing, one of the President’s guests was successful businessman and the inventor of MyPillow Mike Lindell. Lindell recently announced that his company has repurposed most of their production warehouses to instead mass-produce masks for hospitals and other emergency personnel, producing up to 50,000 masks per day.

And yet despite Lindell’s efforts to fight the Chinese Coronavirus, the Fake News Industrial Complex and left-wing activists on Twitter could not help but attack Lindell mercilessly for appearing alongside President Trump, with some referring to it as simply a commercial for MyPillow. CNN even cut away from its live feed of the press conference shortly after Lindell took the podium. And Lindell’s number one sin? Mentioning God and the Bible from the Rose Garden.

But not only are Lindell’s efforts noble and representative of the potential of the free market to solve our problems, but his message was also one that all Americans needed to hear: He reminded us of the power of prayer, and to have faith in God through these trying times. That universal message of hope and faith, combined with the irrefutable facts of what he has done to combat the spread of the virus, means that the majority of Americans stand with Mike Lindell, and not with the Fake News or radical Left. 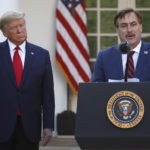