Last night, your host of AMERICA First was trending on Twitter for the most hilarious of reasons. A scribbler working for the far-left Media Matters shared a clip from the latest episode of our new podcast with Boris Epshteyn, “The Battle for 1600.” In the clip, Boris and your host discussed President Trump’s masculinity, and how the Left and the NeverTrumpers alike who hate the President hate him because he is a man’s man, and an old school leader in every sense of the phrase.

In a pathetic yet mildly amusing display, much of the Twitter Left – as well as some of the usual suspects from the Never Trump crowd such as Jonah Goldberg and Rick Wilson – suggested that President Trump is not masculine, and that they somehow have a better grasp on the concept of masculinity than the President does. No really. Rick Wilson. And Goldberg.

Not only is this especially ironic, since the Left and NeverTrumpers have spent the last several years decrying “toxic masculinity” and trying to abolish traditional gender roles, but it also proves that they fundamentally do not understand what masculinity really means and why it matters. President Trump is not an alpha male solely because he talks tough; if talking tough was a requirement, then Joe Biden – with his nasty habit of insulting voters and snapping at reporters – could be considered an “alpha male!”. Yet everyone knows that the near-senile Joe Biden is not what anyone would call exactly manly.

President Trump is a strong man because he is a strong leader, and because words lead to actions. He stands up for his country and pushes back aggressively on forces that have pushed our less than robust leaders around in the past; from globalist elites and their “America last” trade deals and “green energy” accords, to the mullahs in Iran, to the now-vanquished caliphate of ISIS. President Trump doesn’t merely talk a good game, he has the tough game to match. His is a presidency that has revived not only traditional masculinity, but American strength globally. That is part in fact of the Make America Great Again Agenda.

And this is why those who continue to oppose President Trump – whether it’s the Left or the NeverTrump “conservatives” – do so because they know that they are the exact opposite of him in every way. Those who took umbrage at our podcast episode don’t even rate on any putative scale of masculinity. They despise what President Trump and his followers represent, and their collective meltdown on Twitter last night merely exposed their insecurity for the whole world to see. But it was fun to watch. 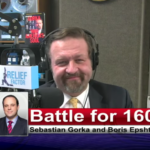 America First Update: The Left and NeverTrumpers Learn a Painful Lesson in Masculinity