Two nights ago, President Trump gave a 10-minute Oval Office address in which he outlined his plan to combat the Wuhan / Coronavirus. Below are details of his plan, so that you can be more familiar with the steps that the United States government is taking going forward:

The President is prepared to address this not only as a health crisis, but as a threat to our economy and national security, securing our borders and providing swift economic relief to those suffering during this time. This plan will cover all possible aspects of the virus’s impact, and as always, will put Americans and America first. 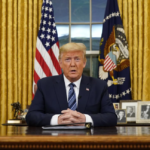