With General Mike Flynn fully vindicated, the tables are now turned against the Deep State. The implications for this reversal go all the way up to the highest levels of the Obama Administration.

Here are the key culprits in the plot against Flynn and the attempted coup against candidate, and then President Trump:

Glenn Simpson: Owner of the professional smear firm Fusion GPS, which was hired by the Hillary Clinton campaign to conduct opposition research on then-candidate Donald Trump. Simpson would subsequently enlist Christopher Steele to come up with the majority of the disinformation used by Comey’s FBI and Brennan’s CIA.

Christopher Steele: The former British spy who was responsible for the fabricated “dossier” that first accused then-candidate Donald Trump of collusion with the Russian government. His work was the catalyst for the the Russia hoax. Steele was posted to Moscow with M-I6 as used Kremlin contacts to acquire his propaganda for the “dossier.”

Bruce and Nellie Ohr: Bruce Ohr was the senior Justice Department official who served as Steele’s direct connection to the FBI, thus fast-tracking his work and ensuring that it would eventually end up as the FBI’s primary “evidence” for a FISA warrant to spy on the Trump campaign. Ohr’s wife Nellie served as the connection between Ohr and Steele since she was a Russia specialist working for Simpson at Fusion GPS.

Peter Strzok: The senior FBI agent who has since been confirmed to be directly responsible for keeping the case against Flynn open when the FBI was prepared to close it due to no evidence of wrongdoing on the General’s part. Texts between Strzok and his married lover revealed his hatred for President Trump, and led to his removal from Robert Mueller’s special counsel team.

Lisa Page: The FBI lawyer with whom Strzok had an affair, during which they exchanged numerous text messages revealing their anti-Trump biases, including infamously describing the planned conspiracy and subsequent investigation as an “insurance policy” in the event that candidate Trump won the 2016 election.

James Comey: Then-director of the FBI, under whose watch the conspiracy by Strzok, Page, and others led to not only the illegal FISA warrant against the Trump campaign, but the plot to take down General Flynn. Comey privately told President Trump that he was not personally under investigation; however, he refused to make this same statement publicly, thus allowing mainstream media speculation to continue about the possibility that President Trump was being investigated as a Russian asset.

John Brennan: The CIA director under Obama, who illegally leaked information about the Trump-Russia investigation to the media after first delivering it in a briefing to then-Senate Minority Leader Harry Reid. Brennan had previously weaponized the CIA against the Trump campaign to entrap George Papadouplos, a junior foreign policy advisor.

James Clapper: The Director of National Intelligence under Obama, who, like Brennan, was found to have illegally leaked information about the investigation to the media so as to smear candidate Trump with the false accusation of “Russian Collusion.”

Andrew McCabe: Deputy Director of the FBI under Comey, a key solder in the conspiracy to frame General Flynn and smear President Trump who, similar to Brennan and Clapper, also leaked information to the media in order to stoke speculation about possible collusion between the candidate’s campaign and Russia.

Barack Obama: The former president, on whose watch all of these blatant acts of corruption first took place, and the earliest stages of the Russia investigation were set in motion. Beyond simply hiring and empowering the above criminal to serve in the highest positions of intelligence in his administration, must have had direct knowledge of the plot against Donald Trump, and the President indicated as much today.

For a full, comprehensive timeline of the scandal targeting General Flynn, known as “Operation Crossfire Hurricane,” see this article. 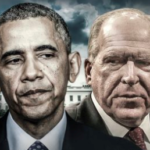 America First Update: The Conspirators in the Plot Against Flynn, and their Crimes