As the Chinese Wuhan Coronavirus seems to be past its peak in the country’s hardest-hit states, one of the largest states is set to officially reopen within days.

The great state of Texas, as per an executive order signed by Governor Greg Abbott, will reopen its economy this week, with Governor Abbott set to announce the details of the restart process on Monday. The plan involves a small business initiative that, Governor Abbott says, will “protect lives while restoring livelihoods.”

The rollout of Texas’s economic reactivation could prove to be a model for the rest of the country, as millions of Americans seek to return to their everyday routines that have been disrupted by the spread of the Coronavirus.

President Trump is also set to announce the formation of a second Coronavirus task force focused specifically on rebuilding the American economy, which will be led by White House Chief of Staff Mark Meadows. With the shutdown now having lasted for over three weeks, over 16 million Americans have lost their jobs, which is projected to bring the unemployment back into double digits for the first time since the disastrous Obama presidency. 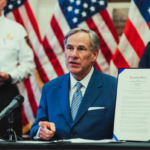 America First Update: Texas to Reopen its Economy This Week