Few stories have come out of the Coronavirus lockdown that are more appalling than the treatment of Shelley Luther, the salon owner in Texas who has just been sentenced to a week in jail and a fine of $7,000.

As we discussed on the show yesterday, Ms. Luther simply wanted to reopen her business so that she could continue to feed her children and her staff could provide for theirs. When Judge Eric Moye, a friend of Barack Obama, was preparing to sentence her, he demanded that she “apologize” to public officials for defying the lockdown order. She refused to do so, and was prepared to go to jail.

Now, in an act that truly proves what it means to be a citizen politician, Texas’ Lieutenant Governor Dan Patrick has stepped forward and offered to take Ms. Luther’s punishment, saying that he will gladly pay both the fine and serve seven days under house arrest. Lieutenant Governor Patrick rightfully described Ms. Luther’s punishment as “outrageous and out of touch,” blasting Judge Moye for his shameless display of tyranny. 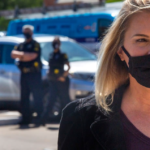