In the latest major revelation in the Obamagate scandal, the entirety of former National Security Adviser Susan Rice’s email written on President Trump’s inauguration day has been declassified.

Portions of the infamous email had already been leaked before, including Rice’s suspicious statement that Obama allegedly wanted the “Russian collusion” investigation to be done “by the book.” However, the key paragraph that remained redacted has now been revealed, courtesy of Acting DNI Ric Grenell, and reveals more details of a meeting on January 5th, 2017, in the Oval Office between former president Barack Obama, former FBI Director James Comey, former CIA Director John Brennan, former DNI Director James Clapper, and former Vice President Joe Biden.

Specifically, Comey voiced his belief that General Michael Flynn’s communications with Russian Ambassador Sergey Kislyak were “unusual,” despite presenting no evidence that there was anything untoward about them. As a result, when Obama suggested that the outgoing administration withhold intelligence regarding Russia from the new Trump administration, Comey agreed. This was despite the fact that, in the same exchange, Comey admitted that he had no reason to believe Flynn had shared classified information with Ambassador Kislyak.

This further proves that not only was there a deliberate effort to sabotage the incoming administration by withholding intelligence information, but that most of the Obama Administration’s top figures were in on the plot to undermine the Trump Administration. Watch our recent three-hour special on ObamaGate here. 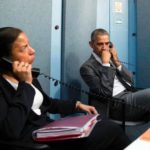