Richard Burr (R-N.C.), the senior U.S. Senator from North Carolina, is facing widespread calls for his resignation from the Senate after it has been revealed that he may have engaged in insider trading regarding the Coronavirus.

It has been reported that after receiving a Classified briefing from the government on the projected spread of the Chinese Coronavirus, Burr sold up to $1.72 million in stocks in mid-February, anticipating the coming stock market crash. If true, this would be in direct violation of the Stop Trading On Congressional Knowledge (STOCK) Act, which Burr was one of only three senators to vote against when it passed in 2012.

Burr had already lost much of his popularity amongst Republicans when last year, as Chair of the Senate Intelligence Committee, he issued a subpoena for Donald Trump Jr. over alleged “Russian collusion.” He was widely criticized for the move, with Trump ultimately ignoring the subpoena. As such, the calls for his resignation and prosecution are now bipartisan. His supine response to the Democrat attempts to remove President Trump from office was noted at the time. Now Senator Burr’s future is unsure, with at least a formal ethics investigation likely. 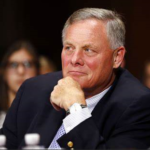