After lengthy negotiations, the U.S. Senate has passed the latest Chinese Coronavirus relief bill, aimed at providing financial relief to small businesses impacted by the spread of the virus.

The bill passed by the Senate last night costs a total of $484 billion, with $380 billion of that going specifically towards small businesses. Another $75 billion will be given to struggling hospitals, and the remaining $25 billion will be spent on further disease testing.

The bill represents the upper chamber’s best efforts at providing additional relief to small businesses after Democrats had previously blocked a proposal to send $250 billion to small businesses. This new bill will now go to the House of Representatives, where it may be passed as soon as Thursday if the Democrats do not resort to more partisan maneuvering, such as attempting once again to include unrelated demands, such as universal ballot-harvesting, into the package. 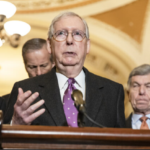